You may be familiar with music notation that looks like this:

This type of music notation has been around since the 11th century, when music theorists and teachers like Guido of Arezzo began to develop the system of stave notation (notation using lines).

The aim was to help musicians learn and remember songs more accurately and also to help to preserve songs for future generations.

As this type of music notation developed through the centuries, it allowed for more complicated forms of music to be imagined and performed.

Using musical notation allowed them to give instructions to musicians of exactly what to play, when to play it and how to play it.

This system of musical notation was used by composers to create incredible music, from the choral music of 14th century France....

.....to the huge orchestras of the classical and romantic eras......

Music notation has changed to suit the music being made throughout the centuries and in turn music has been influenced by the type of notation available to the composer.

A number of composers in the 1950's began to experiment with alternative types of musical notation to facilitate their expanding world of new sounds, instruments and performance techniques.

Composers like John Cage, Cornelius Cardew and Morton Feldman began to experiment with new forms of notation that challenged the tradition methods of composing and performing music. 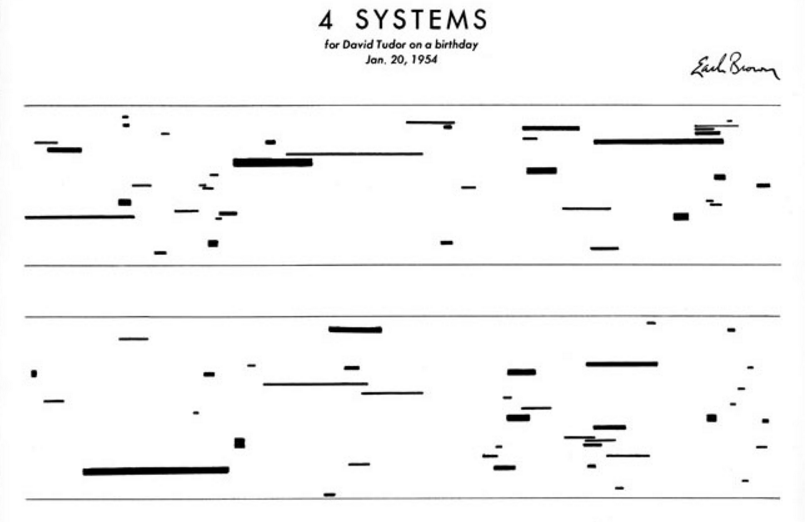 With this type of 'graphic music notation' it is often left up to the performer to interpret the symbols and make decisions as to what the music will sound like.

Each symbol can be performed in a number of different ways.

In many cases, you don't have to be a professional musician or even play an instrument to be able to understand it!

This is the type of notation we use in DabbledooMusic.

Because it allows everyone to perform, compose and explore sounds and music together!